What You Should Know About San Antonio Foundation Repair

Homeowners tend to spend the majority of their time inside the house where sheetrock cracks are easily noticed. While repairing and re-painting the sheetrock is effective as a temporary cosmetic repair, the cracks will quickly open back up and get worse if the underlying foundation issue isn’t addressed. Cracks in plaster or sheetrock will help you determine whether the settlement you are experiencing is on the interior of your home or along the perimeter.

While sheetrock cracks are easy to repair, brick cracks are not as simple – and they generally present the biggest concern to the homeowner. The types of cracking vary in direction and size. Often the cracks will be larger at the top and narrow at the bottom. This indicates downward settlement on a corner of the house, and the cracks are usually accompanied by the wall rolling — which will push out the trim near the roof. Another common brick crack pattern will be narrow at the top and wide at the bottom, which indicates sagging in the middle of the wall.

Sticking or separating doors and windows are a clear indication that the structure of your home has begun to be compromised. Looking at the reveal of your door (the gap between the top of the door and the door jamb), you can figure out on which side the settlement is occurring. The reveal will be uneven; the narrow side creates an arrow which points toward the side that’s low. Doors and windows that stick can cause safety concerns. Recovery and support of doorways is one of the most common requests we get from customers.

Another culprit in foundation cracks is the dreaded plumbing leak. We’re not talking about the pressure side coming into the house — that can be monitored by your monthly bill and watching the meter. The drain side of your plumbing — the exit from tubs, toilets, and sinks to the sewer — is not metered and can leak for years without detection. This can sometimes cause the soil to erode from under the slab, or even expand the clay to the point that the home raises above its intended level.

Where Will You See Cracks Appear? 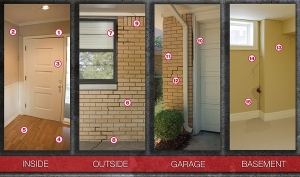 Make an appointment with Ram Jack Texas - Central/South to learn about specific services we offer or start by calling (210) 970-7115.