Why is My Home’s Foundation Beginning to Settle?

Have you started to notice cracks appearing in your brick, stucco, or sheetrock? Does your house seem to be sinking? Don't wait for seasonal or climatic changes to further damage your house. Call or contact Ram Jack and let us evaluate your home. Ram Jack is the full-service foundation repair company that pioneered the industry with professionally evaluated foundation repair methods.

More information about the signs and symptoms of foundation issues >

UNDERSTAND THE CAUSES OF FOUNDATION CRACKING AND SHIFTING 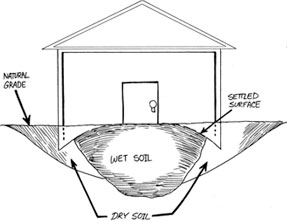 Water is the primary enemy in expansive soils problems. There is either too much water, causing the soil to swell, or not enough, causing the soil to shrink. Moisture beneath the center of your foundation remains consistent unless aggravated by the introduction of excess moisture, such as plumbing leaks or sub-surface water movement. As evaporation and transpiration cause the soils to dry and shrink around the perimeter of your foundation, the structure begins to move. Uneven moisture causes uneven movement, which can lead to both structural and cosmetic damage to your home.

If all soils beneath a foundation swell uniformly or shrink uniformly, it is unlikely to cause a problem. But when only part of the foundation heaves or settles, differential movement causes cracked brick and other damages.

Most differential movement is caused by differences in soil moisture. After construction, soil beneath part of the foundation becomes wetter or drier than the rest of the soil.

WHY HOUSES SETTLE AND CRACK DUE TO WATER FLUCTUATIONS

1. There is a gain in soil moisture: This is the most serious threat since the swelling potential of expansive soils is much greater than the shrinkage potential. Moisture gain can come from plumbing leaks, subsurface water like wet weather or a high water table, or surface water, including improper drainage of landscape water or excessive rainwater.

2. There is a loss of soil moisture: The soil may be at or near its optimum moisture content when the foundation is built, but it may lose enough moisture during a drought to cause the foundation to settle. Settlement is usually greatest near the perimeter of the foundation where the soil dries most quickly.

3. Extremely low or high soil moisture exists during construction: If the soil content is very low when a slab-on-grade foundation is poured, soil to the slab edges regains moisture first because it is directly exposed to rainwater or irrigation water. If the soil moisture is extremely high during construction, the slab will hold in the moisture except at the perimeter, where it is exposed to more wind and heat. In these cases, the slab edge loses moisture at a different rate than the soils under the house and the house will settle. 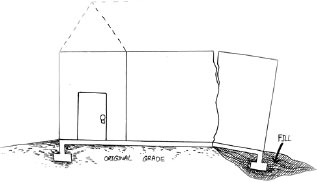 4. There is poor pre-construction compaction of the building pad: Slab-on-grade foundations depend on the uppermost soil layers to provide bearing capacity to support the structure and keep the foundation stable. If the bearing soil was not compacted properly during grading, the foundation is subject to settlement as the supporting soil consolidates.

A few things need to be understood about settlement. First, all houses settle. The amount may be so small as to be undetectable or may be so uniform as to leave no signs, but it unquestionably happens. Second, because of the natural and construction-related variations in soil properties, not every point on a foundation settles the same amount. To avoid continued cracking door frames and cracked brick, you must sustain differential settlement, the difference in settlement between various points on the foundation. The distinction between total and differential settlement is important.

The Palace of Fine Arts in Mexico City, for instance, has settled several feet without significant distress to the structure and remains in service because the settlement has been uniform.

The Leaning Tower of Pisa, on the other hand, is useless for anything but the Kodak moments of tourists.

If underpinning is properly designed and installed, it will provide the basis for lifting the house or building to a more acceptable elevation and will provide vertical support to prevent the underpinned areas from future settling.

Ram Jack is a certified installer of Fortress Support Systems. These carbon fiber/Kevlar® grid strap reinforcement systems are designed to sustain and repair concrete, foundation, and other structures that have fractured or bowed due to soil pressure, water damage or other causes. Carbon fiber/Kevlar grid straps are proven to be the best solution on the market today, providing innovative solutions for concrete reinforcement.

Ram Jack will professionally evaluate your home to determine what settlement issues you may have. Our technicians are trained and certified through the Ram Jack training program. We will investigate your entire house or structure, not just the areas of visible settlement and cracking. Once the settlement has been accurately diagnosed, we will design a service plan with a diagram of your home, pinpointing the locations we recommend installing piers to sustain the foundation. We will give the service plan and diagrams to you at the end of the evaluation.