Over the years Ram Jack has been involved in the restoration of several historical buildings and landmarks. Whether it is stopping an observatory from sinking all the way or raising porches for historical homes, Ram Jack is always up to the job. 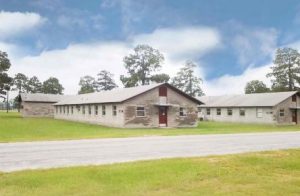 Military Barracks serve as the homes to some of America’s finest. While barracks don’t have to look fancy, it is important that they are structurally stable and safe. At Fort Stewart in Georgia, one barrack showed signs of foundation settlement. Due to the leaning and separating of the walls, there were large cracks and gaps in the brick. RL Construction awarded Ram Jack South Carolina the pile installation project. Ram Jack South Carolina proposed that 15 driven piles should be installed along the barrack’s exterior walls. They would run from the crack on the right side of the wall to the crack on the left side. Fifteen 2 7/8 in. driven piles with standard brackets were installed in the troubled area of the barrack. Once they were installed the piles reached an average depth of 7 ft. and lifted the barrack almost 3 in. in the area of the most severe foundation settlement for a complete restoration of the barrack. 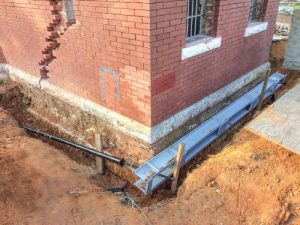 Millsaps College in Jackson, Mississippi is the home to a historic landmark. The James Observatory is an iconic brick building and a main feature of the campus. The James Observatory is an iconic brick building and a main feature on campus. The observatory was built in 1892 and was topped with a wooden catwalk and a rotating dome. The observatory was renovated in 1980 to provide students with an opportunity to learn. The building is available to go in and look at the stars, or just to enjoy the night sky. The observatory was starting to have severe problems in its rear wing. The end of the structure was sinking, as evidenced by cracks in the mortar of the bricks on each side of the building. The observatory had settled as much as 4 in. along the back wall. Ram Jack Mississippi was called in to resolve the problem. Ram Jack Mississippi proposed using two battered tiebacks with an epoxy-coated whaler to pull the wall back to its original location. Due to all of the damage and other issues, Ram Jack was unsure if the structure could be recovered to its initial condition. Two 2 7/8 in. battered helical piles, tied to a custom whaler, were installed. The piles reached an average depth of 18 ft., and stabilized the structure. 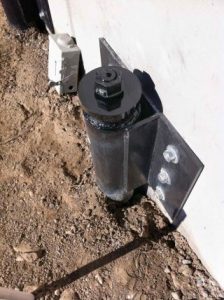 The Limestone County Courthouse, in Athens, Alabama, is a beautiful historic building. It not only represents justice and peace, but it represents the heart of the south in Athens. While the courthouse has a beautiful exterior, the interior was in need of some upgrades. This included removing interior walls and enlarging interior rooms. In order to provide support to the courthouse after the renovations, increased foundation support was needed. Alabama Ram Jack proposed the installation of a system of helical piles to support the new footings inside the building. Ram Jack faced a number of obstacles in the courthouse. Ram Jack could not use mechanical equipment in the courthouse, so all piles were installed using handheld drivers. The first pile reached bedrock at a depth of 31 ft. without providing significant torque. It was clear that the soil was not as stiff as initially anticipated. Ram Jack was able to overcome every obstacle they faced. Ram Jack provided custom, heavy duty brackets in areas of need to provide additional support to the structure. Then Ram Jack used a triple 8”/12”/14” helix configuration that was spaced in a way to make sure the building was supported prior to the piles reaching bedrock. Alabama Ram Jack installed 61 piles to an average depth of 24 ft. in just 14 days. The renovations were completed successfully and structural integrity was restored to the Limestone Courthouse. 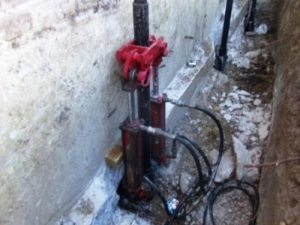 In Kansas City the Mid-Continent Public Library provides learning experiences and books to everyone in the community.
While the historic brick structure looks solid as a rock, over time the foundation below started to settle. The library’s walls were beginning to show some wear. KC Ram Jack was contacted to take a look. The library had severe settlement in the southeast corner of the building. More settlement was discovered around the south and west walls. KC Ram Jack proposed installing 28 piles to raise and support the settling parts of the library. After making a slight modification Ram Jack installed 26 exterior piers to an average depth of 16 ft. This stabilized the south and west walls. The library was able to remain open during the entire process and the job was finished in a timely manner.

The Woodland Homes, a collection of historic houses in Birmingham, Alabama, were being restored to their original appearance and integrity. Two of the homes undergoing restoration had suffered foundation problems. Their columns and front porches started to settle. Alabama Ram Jack proposed installing helical piles to raise the falling foundations as much as practical. Alabama Ram Jack installed seven helical piles at the properties. The structures lifted an average of two in. for maximum practical recovery. 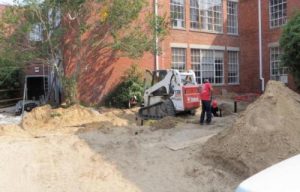 A 100-year-old building had been used as a school, courthouse, and a theater. Horry County, South Carolina, looked to turn it in to a historical museum. They wanted to build a slab that would have a crawl space underneath it for the interior of the building. For the exterior, they wanted to build a foundation for a new air conditioner and front enclosure. Ram Jack South Carolina installed 167 helical piles. The piles went 50-60 ft. deep. Most of the piles were installed manually on the interior. Due to unpredicted access as the job went on, Ram Jack was required to mobilize more times to complete the installation than predicted. Horry County was very pleased with Ram Jack’s ability to make unpredictable changes as well as the ability of the Ram Jack crew to manually install the piles.

No matter the type of project Ram Jack is always up to the challenge. If you need any information don’t hesitate to contact Ram Jack today.