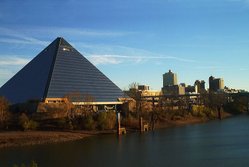 Ram Jack of Tennessee was awarded the opportunity to work with Montgomery Martin on the Memphis Pyramid Redevelopment Project, Package 3A – Seismic. The former sports arena was built in 1991 and stands 321 ft. tall, approximately 32 stories. When redevelopment is complete, the facility will provide 220,000 square feet of retail space to its new tenant, Bass Pro Shops. 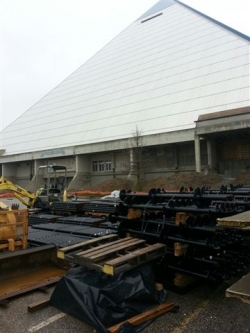 The City of Memphis has completed the demolition of the interior; removing the bleacher systems, retail kiosks, and on-site restaurants in preparation for Bass Pro’s new construction and build in August 2013. They are hopeful to be open for business by year-end to enjoy this year’s holiday season.

The footings under (supporting) the pre-cast concrete (10 ft. wide x 44 ft. tall) panels at the base of the pyramid have settled up to 6 inches. This settlement caused panels to crack and pull away from the upper deck mezzanine level. It is a widely known fact that the pyramid was built on bad soils.

Work should begin in the coming weeks to raise the footings using the patented helical piling system manufactured by Ram Jack Manufacturing and Ram Jack Systems Distribution based in Ada, OK. The expected depth of the helical piles to be installed is 57 ft.