Seawall Contractors Based in Wareham, MA

Ram Jack New England provides solutions for property owners with seawalls that have sustained damage or that are showing signs of deterioration. Seawall failure can be caused from many factors. Poor construction using rebar is one of the most common reasons for failure. Other reasons include the long-term effect of pressure from changes in climate and tide or poor soil conditions.

Whatever your specific cause may be, our seawall repair professionals can inspect your property and come up with a long-lasting solutions.

Call (508) 232-4676 for professional seawall solutions in Massachusetts and Rhode Island.

Signs to Watch For with Seawall Damage

You may notice any of the following items if your seawall is deteriorating. If you are still unsure about the condition of your property after looking for signs of damage, we recommend setting up an appointment for a professional inspection. 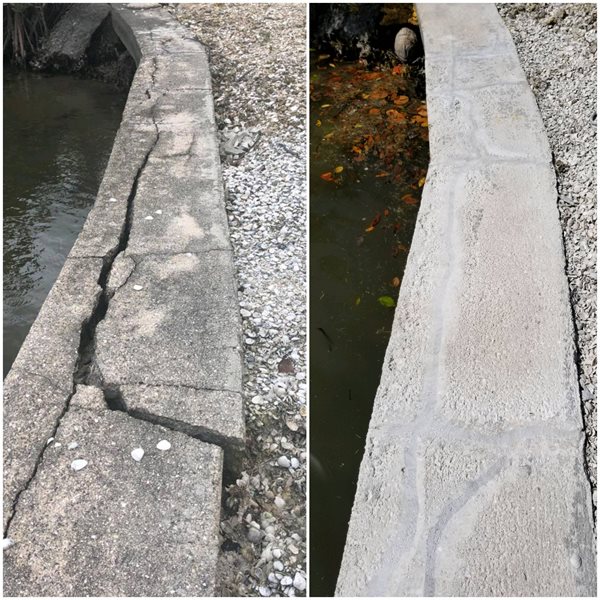 The repair process for most seawall problems will involve excavation within a few yards of the seawall. Our team will work hard to keep the excavation area confined to a small space. If the seawall was held in place by rebar, the excavation will expose this old system so that it can be removed. In place of the old system, helical piers will be installed in the soft soil near the seawall and drilled in until load-bearing soil is reached. The piers will be installed at the best possible angle to support the wall. After the anchor is in place, it will be fastened to the wall with multiple rods extending from the pile into specialized brackets. The retention system will provide the correct level of tension to hold the wall in place.

Alongside issues with deterioration of seawall anchors, soil erosion and sinkholes are a common problem relating to seawall maintenance. Erosion can be a serious issue that can destroy a seawall as well as a significant amount of property behind the seawall if it is not addressed promptly and correctly. Pressure caused by water trapped on the landward side of a seawall is usually a main culprit in erosion and sinkhole formation. If signs of seawall erosion are visible, it often indicates a far more extensive problem that can extend for a significant distance around a seawall. One main solution for dealing with erosion around a seawall is injecting grouts to fill the voids that have formed.

For more information about our seawall repair services in Massachusetts and Rhode Island, contact (508) 232-4676 today!