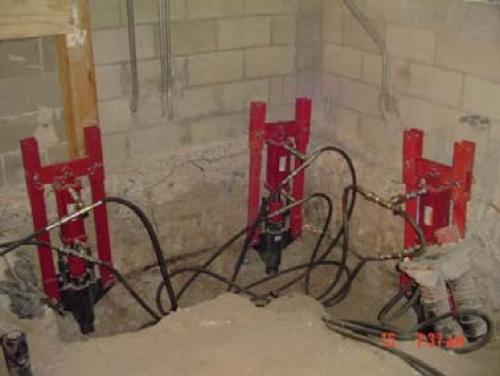 Situation: In the early spring of 2007, Scott Kremke and Ram Jack of California were contacted for a bid on the repairs needed on a Rabobank property in Calexico, California. The bank building had a large crack across the floor, and the windows and doors were misaligned. The bank owners were concerned that the vault might become inoperable due to the building settling. Working with Grenier Engineering of Phoenix, Arizona, Ram Jack of California proposed a repair design consisting of 70 Ram Jack® Deep Driven Steel Piers on the perimeter foundation of the structure and 30 Ram Jack® Helical Piers on the interior slab.

Solution: Due to the condition of the structure and the extent of the repair and remodeling plan, a complete relocation was required. Earlier attempts at repairing the structure presented some challenges within the scope of the project. One of the support beams for the roof system was placed directly over the rear opening and was causing the header to fail and had opened a large crack in the above wall. During the concrete removal for the pier locations on the interior slab, the header and roof system began to go into further failure. A design and repair of the failing header and roof system was installed and a decision was made to remove the entire interior floor system and use the 30 Ram Jack® Helical Piers as preconstruction anchors. The loads created by the 3’ by 3’ footing system and the 25’ masonry walls with the free span roof presented a challenge for Ram Jack of California to perform the required lifting of the structure. A Ram Jack® Manifold Lift System was purchased for this. The lift system allows for a uniform lift to be made at several pier locations. With an ultimate lift capacity of 50 kips per location, most residential and commercial structures are within the design capacity of the system. The Ram Jack® Deep Driven Steel Piers were driven to a final depth of 60’ with an ultimate capacity of 60 Kips and the Ram Jack® Helical Piers were driven to a final depth of 20’ with an ultimate capacity of 40 Kips. With all of the piers installed, a lift was made on the structure using the Ram Jack® Manifold Lift System. The final elevation recovery was 3.5”, leveling the front of the structure with the built-in concrete vault system. This corrected the misaligned windows and doors and allowed for the new slab to be installed without any slope.

Conclusion: Ram Jack of California was able to provide Rabobank with all of the services they required to get their property back in a safe, stable working condition. The versatility and strength of the Ram Jack® Systems allows for most residential and commercial applications to be completed with ease.