Especially during colder times, there is nothing quite like having a fire in the hearth. Something about those flames flickering is soothing to the soul. But one thing that doesn’t soothe the soul is when a chimney starts showing signs of failure. When a chimney loses structural support, it can pull away from a house and fall on the ground, or lean inwards and fall onto the roof. Neither of these scenarios is pleasant to any homeowner. Fortunately, Ram Jack is able to remedy chimney problems. 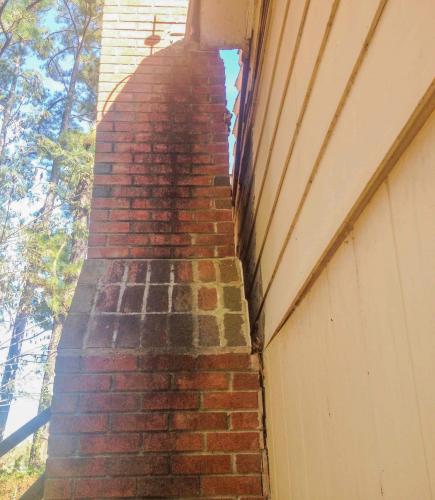 When homeowners in Columbia, South Carolina noticed significant chimney separation, they knew repairs had to be made. If the problem was not addressed, the separation would continue and could result in a fallen chimney. So, they contacted Ram Jack South Carolina. After discovering the chimney had separated a total of 8″ from the house, Ram Jack proposed installing two helical piles, one beneath each of the chimney’s corners. The helicals would provide structural support to the chimney and allow it to be lifted back to a stable level. Once the piles were installed, the chimney was lifted and the gap between it and the wall was closed. With the house and chimney back to a healthy relationship, homeowners were pleased and thanked Ram Jack for the fast and efficient work.