Retaining walls are invaluable when it comes to structural stability. They provide lateral resistance and prevent sloping soil from causing damages due to pressure. However, over time, bad soil conditions and improper drainage can cause retaining walls to sink or shift. This leaves structures susceptible to the pressure of sloping soils. Fortunately, that is where Ram Jack comes in. 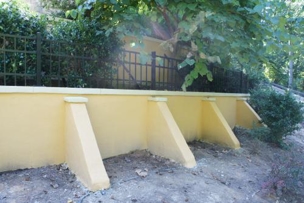 Inferior construction methods can often lead to foundation problems. Such was the case with a property in Chapel Hill, North Carolina. Because of a backfill issue, the double retaining wall surrounding the pool on this property was cracked and leaning. So, the homeowner hired Foundation Solutions, LLC to repair the damages. The job seemed normal at first glance, but because of geographical obstacles, Ram Jack decided to alter the original repair plan. Instead of the traditional way, Ram Jack installed helical tiebacks at 45-degree angles in a battered pile array with customized brackets to support the retaining wall. Additionally, three helical piles were installed to support the footing.

In addition to repairing them, Ram Jack also has experience installing and replacing retaining walls that have been damaged. 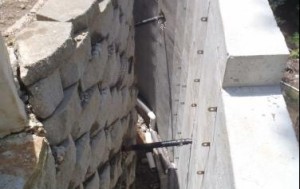 When foundation problems began arising underneath the pool at a relatively new Birmingham, Alabama property, the homeowners contacted Alabama Ram Jack to come take a look. The pool was built on a system of retaining walls that was failing due to improperly compacted soil, only one year after construction. In order to efficiently correct the structural problems, Ram Jack installed a new retaining wall and a total of 85 helical piles. The recovery of the complex retaining wall system was successful, and the picturesque quality of the property was maintained. 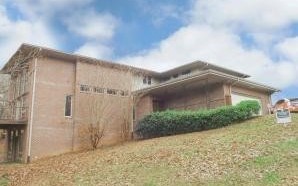 A homeowner in Birmingham, Alabama was in the process of selling, when a property inspection revealed severe foundation settlement. Realizing repairs were needed, they contacted Alabama Ram Jack. In order to stabilize the exposed footings, Ram Jack installed 6 helical piles in the crawlspace. Additionally, a retaining wall was built to support the soil bank underneath the structure using helical piles, which were attached to the existing rebar grid.