Over the years Ram Jack has been involved in several sports venue-related projects. Ranging from helping install a base for bleaches for one high school team all the way to helping an NFL team with their weight room, Ram Jack is always up for the challenge.

Narrows High School, in Narrows Virginia, needed a new 1250 seat grandstand for their sports facility. The grandstand needed to be constructed within a 30 day period in order to be ready for the school’s upcoming football season. The problem was that the grandstand was to be constructed on a steep hill. The steep slope of the hill made it difficult to use heavy equipment required with other deep foundation systems. Ram Jack was added to the design team to provide a solution that would handle the design loads in a fast, efficient, and long-lasting way. The design loads consisted of vertical loads and lateral loads. Helical piles would support the vertical loads and helical anchors would resist the lateral loads. A steel pile cap was designed that could be attached to the helical piles and anchors. By going with Ram Jack’s steel foundation system, the school saved considerable time, labor, mess, and expense. Ram Jack installed the helical piles, anchors, and support caps within five days. The grandstand structure was erected in the following five days.

gives golfers a chance to play on a beautiful course 365 days of the year. While tireless attention was devoted to the fairways and greens, many bridges on the course were in need of a repair. Not only were they an eyesore but they were a safety hazard to anyone that crossed them. Northwoods Golf Course reached out to Ram Jack South Carolina to repair and stabilize five bridges as well as stabilize the clubhouse. The bridges needed to be lifted and stabilized to ensure the safety for anyone who crossed them. The clubhouse was experiencing settlement in one area of the main floor. Ram Jack proposed using beam brackets with helical piles torqued to custom depths at various locations around each bridge to stabilize them. For the club house Ram Jack proposed using three helical piles with beam brackets to stabilize the clubhouse from further settlement. In total forty helical piles were installed to raise the bridges and clubhouse. The job was completed quickly and efficiently as to not interrupt course business and the enjoyment of the golfers.

The Jacksonville Jaguars were making expansions to their team weight room. The addition was a 30 ft. by 30 ft. slab to be supported by grade beams. Ram Jack was contacted to support the proposed grade beam of the new slab with helical piles. With a load of 40 kips and allowable of 20 kips Ram Jack needed to come up with a solution to meet the load requirement. Seven Ram Jack helical piles were installed at EverBank Field. New construction piles provided deep support and allowed Jacksonville’s favorite football team to expand its weight room. Ram Jack’s quick installation helped move the repair right on schedule. 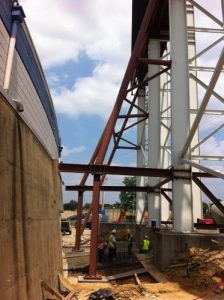 The University of Memphis was getting a new high definition scoreboard installed in Liberty Bowl Memorial Stadium. Engineers proposed using four drilled shafts to be filled 40 ft. with concrete to support the columns of the scoreboard. After installing two shafts they ran into a problem. They overlooked that the last two shafts would be installed in a field of gas, water, and electric utilities. The proposed solution was to move the two remaining piles to a location between the structure and stadium using helicals. Ram Jack designed two foundation support pads to support the load. Seven helical piers were installed at each support pad. Construction brackets were then attached to the helical piles.

No matter the type of project Ram Jack is up to the challenge. If you need any information be sure and contact Ram Jack today.