Residents of coastal states are all too aware that “landfall” of a hurricane is not required to wreak havoc and cause major damage. It was a normal day in the Carolinas until the effects of hurricane Joaquin greatly damaged the homes of residents. What started out as a tropical storm soon grew much, much stronger and became a Category 4 hurricane.

Hurricane Joaquin unleashed heavy rains and winds. It had a record sustained wind speed of 130 MPH. But the damage did not stop there. Because of the strength, as an after-effect, it caused major flooding on the East Coast, particularly North and South Carolina. Some places in SC saw as much as 20 inches of rain; many city areas were covered in 12 inches of seawater. The Gills Creek in Columbia raised 17 feet, which beat the record of 9 feet set in 1997. The Waccamaw River was expected to crest at 16.1 feet.

But among the catastrophes left behind in the wake of Joaquin, one of the most powerful was the extreme damage to the homes in Columbia, SC. In some cases, entire walls of brick were washed away, Many foundations were washed and ripped away from houses by waters up to and even more than 9 feet deep.

One home, in particular, lost so much support that it was collapsing; however, Ram Jack was contacted and immediately got to work trying to save the home. Ram Jack usually specializes in helical and driven steel pile foundation underpinning, but according to Darin Willis, director of engineering at Ram Jack, “It’s not about foundation repair right now; it’s about saving people’s homes.” 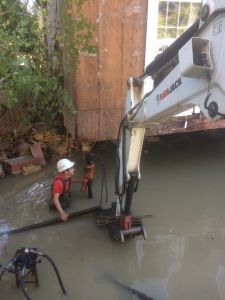 For one homeowner, it was imperative something be done immediately: A large portion of the foundation had been completely swept away due to the flood waters. Eager to help their community, Ram Jack South Carolina immediately sent a crew in and began shoring the home so it would not further give way. Ram Jack South Carolina placed helical piles underneath the house and was able to prevent the home from further collapsing in the flood waters. “It’s a good feeling to stop a foundation from settling, but the feeling of being able to use our system for emergency shoring to save a family’s home and memories is priceless,” stated Willis.

Ram Jack’s rigid steel piles support loads above grade as columns. The fast installation in any weather, in any location make them ideal for emergency shoring in flooding situations that often arise after a major hurricane.

Ram Jack’s foundation stabilization using steel piers is a proven-method that prevents settlement and maintains structural integrity – and in this case, it saved a house from being washed away and totally collapsing.