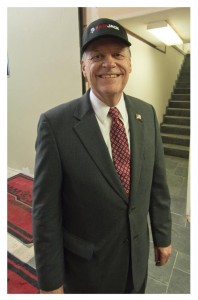 We recently had the opportunity to have Congressman, Tom Cole, visit Ram Jack Distribution here in Ada, OK on January 9. Tom Cole is a United States Congressman serving the 4th District of Oklahoma. Cole was elected into Congress in 2002 and is now serving his sixth term. He is an advocate for small business owners, tax payers, strong national defense, and issues dealing with Native Americans.

Cole noticed the growth of Ram Jack and the new construction of our building in Ada. Cole’s Ada representative, Amber Pollard, contacted Ram Jack about having him visit and speak to the employees. While he was here, Cole took a tour of our facility and plant. After the tour, the employees gathered around to hear Cole speak. Cole updated the group about what’s going on in Washington right now and what his plans are for the future. He also gave the employees a chance to ask questions.